Rob- Introduction- Welcome to episode 101 of Self-Defense Gun Stories.  This podcast is for people who might want a firearm, and for those who already have one.  I’m your host, Rob Morse. We have firearms instructor Andee Reardon as co-host this week. 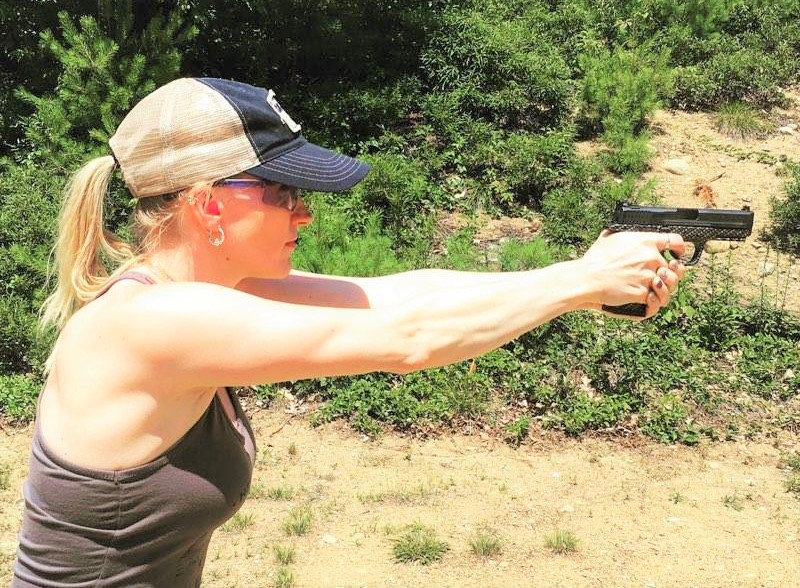 It’s been busy, We are still digging out from the last snow storm and preparing for another one tonight!

Two days ago I held a concealed carry clinic for women at a local gun shop! We packed the room with women and had a great time.

Rob- That is good to hear. Please introduce our podcast to our new listeners.

Andee- Each week at Self Defense Gun Stories we study three recent examples of armed defense to see what we can learn. Our first story took place last week in Corpus Christi, Texas.  Here is what happened.

You’re at home at 1:30 in the morning. You hear glass breaking at the front of your apartment. You also hear voices. You grab your gun you see your ex-boyfriend in your front room. He sees your gun and runs away. You follow him out the door. You shoot at him. Your neighbors tackle him, but he gets up and runs away. Now you call police.

After the police arrive, someone points out your ex-boyfriend’s car in the parking lot. He’s come back. Now the police chase him until he crashes his car.

Your ex-boyfriend was arrested on suspicion of burglary with intent to commit another crime, evading arrest, evading arrest in a vehicle and resisting arrest. He is in jail waiting to make his at $37,000 bail.

Andee- I wouldn’t want to wake up and get into a physical fight at 1:30 in the morning. I’m glad the homeowner was armed.

Andee- That is why a plan is important. The moment the attacker started to run, the victim should have stayed in a safe area and waited for police. Most states don’t see it as self defense if the attacker is running away and you chase them.

Rob- You talk to your students about what to do if they are attacked? It is a legal jeopardy if you chase your attacker.

Andee- It is more than that. You’re also putting yourself in danger not knowing if he is running to retrieve a weapon or if there are more suspects outside with him. You’re inviting trouble and giving up the advantage you hold. By leaving the house you’re losing your use of cover.

Rob- It is pretty easy to stay in your bedroom and defend your doorway. It is harder to protect yourself when you’re out on the street.

Andee- One more thing, the time you spend chasing the bad guy is time your wasting when you could call the police and get help on the way.

Rob- Is there more?

Andee- A lot of my students were in abusive relationships. Women are at their greatest risk while leaving or just after leaving a relationship with an abuser. This man was so intent on hurting her he was willing to come back even when police were present. This is why I’m such a big advocate for gun rights, I want women to have the ability to keep themselves safe.

Rob- You talk to your students about that issue?

Andee- Yes, I’ve helped women make safety plans, install alarms and cameras and trained them in self defense and firearms. It’s a very dangerous time for them. I do what I can to keep them safe and teach them what to do if things get worse.

Rob- Second Story-  Are you armed at home in the morning.

You hear your dogs bark. Whatever is going on, they sure don’t like it. A second later you hear glass breaking at the back of your home. You grab your 9mm handgun and investigate. You see someone standing in your kitchen. You fire a warning shot into the floor and tell him to lie down. He comes toward you and you shoot again. You shoot him in the leg and he lies down. You call police.

They arrest the robber and take him to the hospital and then to jail. He’s being held on a 100 thousand dollar bond.

Andee- Aren’t dogs great? I teach my students to be aware of their dogs behavior and utilize them as alarm systems. Who knows what would have happened if this family did not own a dog.

Rob- I’ll have to buy an alarm instead.

Andee- Who knows what would have happened if they did not have a gun in the home. I’m glad they did but I did notice a few things that could have been done better.

Rob- What’s that?
Andee- The first thing was the warning shot. Using verbal commands and pointing your gun at the intruder should be all warning they need. You are responsible for every round you shoot. When you feel your life is being imminent danger, that is when you shoot.

Andee- The homeowner shot the man in the leg. I don’t know if that was intentional, the fact that he fired a warning shot makes me think it may have been. When you shoot in self defense it’s important to fire at what we call “center mass” which is the chest area. You need to stop the threat as quickly as possible. Shooting at the leg may not stop the attacker and under stress would be easy to miss altogether.

Rob- A gun is a lethal tool. Don’t use it or threaten to use it unless you’re facing a lethal threat.

Andee- There is an idea that being shot in the leg isn’t lethal. It is. Some of your largest arteries are down there. A gunshot can be lethal no matter where you shoot, and it is always considered as the use of lethal force.

Rob- Give me one more comment before we go on to our last story.

Andee- Two people lived in the home. If you can then grab your gun, close your door, and call the police. If there are two of you, then one can defend while the other one handles communications. Believe it or not, but you can’t talk and shoot at the same time. Protect yourself first.

Rob- That is the plan we talked about.

Rob- Third story- Do you have a gun nearby when you are in your bedroom?

You and your wife are asleep in your bed. You wake up when your wife nudges you. You thought it was your son talking to you, but you look up to see a stranger standing at the foot of your bed with a knife in one hand and a stick in the other.

The stranger says, ‘hey man . . . my wife is under the house and Chuck Norris is waiting for me and I’m having a hard time.’

You slowly reach for your gun and point it at the intruder. You dial 911.

The homeowner said the intruder never lunged toward him but appeared mentally disturbed. “If he’d had a gun rather than a knife I would have fired.”

Andee- I told you that dogs were a good idea. This man said his german shepherd would have torn the intruder apart but wasn’t in the home that night.

They are extremely lucky, if the intruder was able to stand over them while they were sleeping he could have killed them. Maybe they always depended on the dog to alert them and because the dog wasn’t home they didn’t wake up.  I wonder how he got in. Were the doors locked? Make sure an intruder has to break in rather than walk in. Even a simple alarm would help in a situation like this.

Rob- Should the homeowner have used his gun?

Andee- He did use it, but he didn’t need to press the trigger. He may have had the legal justification to shoot the intruder, but the homeowner did not see an immediate threat. He re-evaluated the situation and decided not to shoot.

Andee- The couple was in their bedroom so they could have used teamwork. One on defense. The other on the phone.

Rob- That is our theme for this episode.

Andee- There’s one more thing I want to know….

Did anyone find out what Chuck Norris was doing when this was happening??

Exit-  Rob- That wraps up this episode. Andee, thank you for helping us today.  Where can we learn more about you?

Rob- You can share your thoughts with us by leaving a message on the podcast facebook page.  Blake wrote in and said he was surprised. Everyone says that carrying a gun is uncomfortable, but Blake doesn’t find it so. He carries a Glock 19 in the appendix position inside the waistband. He says the only time he notices the gun is if he has to bend over to tie his shoes.

Andee- It is great to hear from you, Blake, and thank you for carrying. Finding the right gun and holster for you can be challenging. It’s even harder for women! That’s why I started doing the concealed carry clinics for women, it’s a great way to learn what others like and dislike and try some out before you buy.

Rob- We carry concealed and so can you.

Andee- We share this podcast with you for free.  Please share it with a friend and give us a rating on I-Tunes and Stitcher.  We’re also available on Google Play Music.