Rob- Introduction- Welcome to episode 110 of Self-Defense Gun Stories.  This podcast is for people who might want a gun for self-defense, and for those who already have one.  I’m your host, Rob Morse. We have firearms instructor Andee Reardon as co-host. 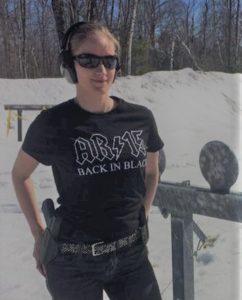 Andee- We study three recent examples of armed defense to see what we can learn.  These gun owners survived a life threatening situation because they were armed. What would you in their place?

Our first story took place last week in Ocala, Florida. This is what happened.

You got a call from your mom. She is out of town but the security cameras noticed some motion in the front yard and called her smartphone. She recognized her ex-boyfriend creeping around her house and your mom called police. She also called you. The police came out, but didn’t find her ex-boyfriend.

Later, you hear a crash from the front of the house. You walk into the hallway to see mom’s ex-boyfriend heading for the bedroom where your younger brother and sister sleep. You shout and shoot the intruder. Now he runs.

You call police..again. They catch the intruder a few blocks away and take him to the hospital.

Andee- Many women who come to me for training want to carry a gun because they are worried this will happen to them.

Rob- How do you help them?

I was pleased to see she had a gun in the home and security cameras.  These are two things I always recommend in this type of situation.

Rob- Talk about access to firearms for your family.

Andee- It’s a good thing her son was there and was armed. Abusive relationships never end well and often the abuser will remain angry long after they seperate. He may have been looking for his ex girlfriend or wanting to take revenge on her children. Thankfully he was never given that chance.

Rob- You train families. How old do children be to be included in self-defense plans..and family problems like a violent boyfriend?

Rob- Second Story-  Are you armed at work?

It is early in the morning and your shop is already open. A customer walks up and puts a bag on the counter. Then he demands the money from the cash register. You back away and the robber tries to pick up the entire cash register. That doesn’t work and the robber pushes you. There are other customers in the store.

You draw your gun and shoot the robber. Now he runs outside. You call police.

They find the robber sitting at a nearby gas station. He is arrested and taken to the hospital with a gunshot wound to the leg.

Andee- I wish we knew more about this story. The first thing I take from it is a man working at a store which is a typical target for robberies was ready and had a pistol for protection.

Rob- Do you have a larger requirement not to get hand-to-hand if you’re carrying a firearm?

Andee- Sounds to me like the cashier waited until things got physical before defending himself.

Rob-When can we defend yourself?

You can’t just shoot someone because they put a bag on the counter and demand money. If someone demands money, you have to make a choice to either comply or get away. Once they threaten physical harm, produce a weapon or physically attack you, you’ll need to protect yourself and quick.

Rob- Third story- Are you armed when you sell your motorcycle?

You don’t ride any longer, so you want to sell your motorcycle. You find a buyer and agree to meet at a nearby parking lot just after work. It is still light out. You meet the buyer and his friend. Both men are in their early 20s. They like the bike. You ask for the cash before you sign over the title and bill of sale.

That is when the buyer draws a handgun and demands the keys. You draw your gun and shoot the robber in the neck. He drops his gun and falls to the ground. The other robber runs. You call police.

The robber is transported to the hospital with non-life threatening injuries. Both robbers are charged with aggravated assault and aggravated robbery.

Andee-  This is why I teach to make sales and transactions at your local police department.

Andee-The man selling the bike was lucky his reaction was quicker than their action. Having a gun already drawn on you is a bad time to try to unholster. My guess is the would-be robbers thought he would be an easy target and underestimated him. He was outnumbered and a bit older than them. Guns are the great equalizer.

It’s important to practice drawing your gun. You can do this in your home with your pistol checked and unloaded. Practice clearing your clothing and drawing from the holster. You should start out slow and get good muscle memory of how you will draw, then add speed. Drawing your gun should be quick and smooth but reholstering should be slow and deliberate.

Exit-  Rob- That wraps up this episode. Andee, thank you for helping us today.  Where can we learn more about you?

Andee-   If you liked this show, then you’ll like the other podcasts on the Self-defense radio network. We share this podcast with you for free.  Please share it with a friend and give us a rating on I-Tunes and Stitcher.  We’re also available on Google Play Music and Spotify.