Rob- Introduction- Welcome to episode 114 of Self-Defense Gun Stories.  This podcast is for people who might want a gun for self-defense, and for those who already have one.  I’m your host, Rob Morse. We have firearms instructor David Cole with us as co-host.

David, I see where you’ve been competing with your concealed carry handgun and teaching Aikido. 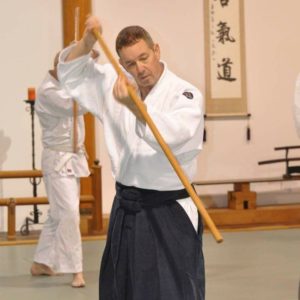 David- Hi, Rob.  I’ve been working out the kinks competing with a new gun; getting students ready for testing at the dojo.

David- We study three recent examples of armed defense to see what we can learn.  These gun owners survived a life threatening situation because they were armed. What would you in their place?

You’ve finished the dishes and are cleaning up when you hear a woman scream from the front of your home. You walk outside and see three teenagers beating a pregnant woman on the sidewalk in front of your house. One of the teens is hitting the pregnant woman with a handgun. You draw your firearm and point it at the attacker. “Stop! Drop the gun or I’ll drop you,” you shout.  The attacker drops the gun and all three teens run away.

The victim was a Dominos Pizza delivery driver. The three teenage attackers lured her to the house next door where they waited to rob her of her money and her car. EMTs took the victim to the hospital for observation. Police arrested and charged the teenagers, two boys and a girl, all 16 years old.

David- This is a case of a third party intervention, with an overall happy ending. Our victim was very fortunate that there was a good Samaritan nearby who was willing and able to come to her aid.

David- A smart decision to respond with a gun, since the attack was 3 on 1…even if the attackers had been unarmed, there is still a disparity of force.

Rob- Should the defender have used a verbal warning? Was he already justified to use lethal force and kill all three attackers?

David- It’s easy to armchair quarterback, but the obvious answer is yes, he should have challenged…because it worked…in this case. But it might not always, and he was certainly justified in using lethal force due to the fact that it was 3 on 1, and there was a weapon involved. Also, I don’t know of any state which requires a challenge be issued prior to use of lethal force. But had the attackers been more committed in carrying out the assault, he might have placed himself at an even greater disadvantage by giving the bad guys that warning, and the resulting time to act first.

It is the afternoon when you hear someone trying to break into your basement door. You get your gun. The intruder walks up onto your back porch and tries to open your back door. The door is locked. You shout for the stranger to go away and that you are armed. The man picks up a retaining wall stone and breaks the glass of your back door. Then he reaches inside to unlock the door. Your two daughters are inside behind you. You shoot your invader. Now he runs and you call police.

EMTs take him to the hospital. Police report that the intruder met your daughter online and he lives in another country.

Rob- Should she have retreated and called the police?

David- She certainly could have, but there was no way that this was going to end well. He had pursued this girl in online communications for months, despite having been told to stop. He flew halfway around the world, and purchased a knife, pepper spray, and duct tape before going to the girl’s house. I believe that this family was aware that this guy was a problem, and fortunately they were prepared. Had they not been, it could have turned into the stuff of horror movies.

David- It worked..this time. Clearly, a centerfire caliber is better, but the gun you have and the gun you can shoot is still better than nothing.

Rob- What do you suggest for your students?

David- As I mentioned, a centerfire caliber is the best choice for most people; .380 as a minimum, and on up from there. It may take a little more training to become proficient, but when you can save your daughter from that sort of fate, wouldn’t that be worth it?

Rob- Third story- Are you armed when you’re getting a cup of coffee?

It is early in the morning. You pull into a convenience store for gas and a cup of coffee. You’re walking to the register when you see the reaction on the clerk’s face. You turn around and see a man wearing a hoodie and a black mask over his face. He has a gun in his hand. The clerk runs out the back of the store. You draw your gun and step to the side. The thief turns around and runs. He’d robbed another store a half hour earlier.

David- Third party again…although the customer easily could have become the victim had the situation continued.

Rob- This is one of those common events that are rarely covered in the news. The defender didn’t have to fire his gun.

David- He had his gun on him. Being able to present in in time meant that he did NOT have to press the trigger.

Rob- Do you talk about a situation like this with your students?

David- I think that what probably gave the customer time to act more quickly than the robber could react was due to awareness. It sounds like the customer had his head up and recognized what was going on, and took decisive action before the robber even realized he was there.

Exit-  Rob- That wraps up this episode. David, thank you for helping us today.  Where can we learn more about you?

David-   If you liked this show, then you’ll like the other podcasts on the Self-defense radio network. We share this podcast with you for free.  Please share it with a friend and give us a rating on I-Tunes and Stitcher.  We’re also available on Google Play Music and Spotify.