Rob- Introduction- Welcome to episode 118 of Self-Defense Gun Stories.  This podcast is for people who might want a gun for self-defense, and for those who already have one.  I’m your host, Rob Morse. We have firearms instructor Andee Reardon with us as co-host. 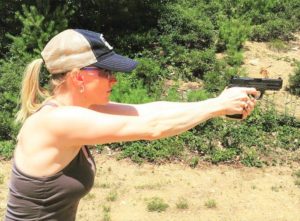 Andee- Hi, Rob.  I’ve been teaching and training. Over the weekend I was at the Women Who Shoot retreat here in Maine. We had an awesome group of women who came and we had a blast shooting together.

Rob- I went to a three day training course for school teachers. Defending kids is deadly serious business and there is a lot to learn.

Andee- I love it! I hope more schools begin to do this and become open to the thought of arming teachers and staff.

Andee- We study three recent examples of armed defense.  These gun owners survived a life threatening situation. Were they lucky, or were they well trained? What should we do if we were in their place?

Rob- First story-  Are you armed at work?

You’re behind the bar at the First and Last Shot Cantina. It is after midnight when you look up to see a stranger walk through the door. This stranger has a gun in his hands. You draw your handgun and point it at the robber. The robber turns and runs. You don’t shoot, but you do call police. Police dogs tracked the robber back to his car, but the robber wasn’t there.

Andee- on body or behind the counter? The story doesn’t say but I like to think he was carrying on body. You never know when you’ll need your pistol and the last thing you want is for it to be out of reach.

Rob- What would have happened if you were at the other end of the bar serving customers when a man walks in and presents a gun. Now the robber gets both the money AND your gun.

Andee- Please carry on body if you can. There are so many options for holsters out there, there aren’t many reasons not to carry on your person.

Andee- Sometimes just having a gun and being confident that you know how to use it is enough. The bartender quickly changed the scene when he drew his gun causing the robber to flee. I’m a firm believer that you shouldn’t carry unless you are prepared to shoot but often that isn’t even necessary..

It is late at night and you’re getting ready for bed. You hear someone knock on  your front door. Then they ring the bell. They are banging on the door really hard, so  you look out the window. You see a strange man sitting in a car in your driveway and a strange woman beating on your door.

You grab the shotgun that you and your husband keep for defense. The strange woman walked around to the side of the house and began trying to open your side door. The intruder breaks the glass and you walk around the corner with your shotgun leveled at her.  The intruder sees you and your gun. Her hands go up in the air, she turns around and walk back to the car. Both the burglar and her getaway driver head down the road. You call police.

Andee- It’s so important to be armed at home with a gun and a plan. This women never had to fire a shot. She showed she was armed and willing to protect herself and that was enough for the would-be robbers. Criminals often work together. I’m glad the homeowner didn’t just open the door because she saw a woman outside. She looked around and noticed the man waiting in the vehicle parked outside.

Andee- What if the gun was on the other side of the house so the homeowner had to fight her way to her shotgun? Keeping your firearm accessible is important and if you don’t carry in your home, make sure you have staged weapons where you can easily grab one if needed.

Andee- Something I did notice that I wanted to point out was the homeowner put the barrel of the shotgun through the window. This is something you don’t want to do, it would give the intruders a chance to grab the gun and take it from her. Always keep that “reactionary gap” open so you have time and space to react to what is going on. Luckily everything went well for the homeowner and she is safe thanks, to owning a firearm.

You’re restocking the refrigerator case at a convenience store. It is 11 at night and a customer comes in with a gun in his hands. He tells you to give him the money in the register. That is exactly what you do.

Next, the robber tells you to get down on your knees and the robber puts a gun in your face. The robber turns away to grab some cigarettes. You grab your gun and shoot the robber three times in the chest. Then you call police. They transport the robber to the hospital and take the robber’s gun.

News reports said your gun was a 45.

Andee- This is another case showing why on the body carry is so important. The store clerk most likely wouldn’t have had a good opportunity to draw his gun had it not been on his body. He waited for the right moment to draw, when the suspect was distracted with grabbing some cigarettes. If someone has a gun aimed right at you and you try to draw, chances are you’ll be shot. Keep calm and wait for the right moment.

Andee- Something I really took from this story was the clerk did not want to harm the man but was given a choice of shooting or the possibility of losing his own life. The media often portrays gun owners as bloodthirsty people who wish for the opportunity to use their gun. This man’s testimony shows he did not want to shoot and he even prayed for the man he shot, hoping he would be ok.

Exit-  Rob- And that wraps up this episode. Andee, thank you for helping us again. Where can we learn more about you?

Andee-   If you liked this show, then you’ll like the other podcasts on the Self-defense radio network. We share this podcast with you for free.  Please share it with a friend and give us a rating on I-Tunes and Stitcher.  We’re also available on Google Play Music and Spotify.