This podcast is for people who might want a gun for self-defense, and for those who already have one.  I’m your host, Rob Morse. We have firearms instructor Amanda Suffecool with us as co-host.

Hi, Amanda. How have you been? 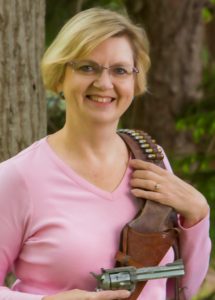 Amanda- Hi, Rob.  I’ve been taking a short break from all things guns, to focus on my second life.  Aerospace engineering. But – thankfully – I am done with that, and now engaged in several cool things.   Nationally syndicated our Radio Show- Stay tuned for more news in September.

Amanda- We’ll study three recent examples of armed defense.  These armed citizens survived a life threatening situation. What should we do if we were in their place?

Rob- First story-  Are you armed as you drive?

You’re driving down the street. You’re 20 miles from the canadian border and there are less than two dozen streets in the entire town. It’s usually a quiet place. You’re parking in front of a clothing store when a stranger jumps through the open passenger window of your car. He shouts for you to get out of your car.

You own a gun. You have your concealed carry license. You’ve practiced with your firearm and you’re armed this morning as you drive.

The article does not say if you drew your gun while you were inside the car or outside, but you present your gun and order the robber to the ground. You tell him not to move. Police arrest the robber for multiple break ins he committed that morning.

The police facebook page described the event this way. “Crimes happen and they happen in the blink of an eye usually when you least expect them, even in small towns like Republic. I encourage the free exercise of our inalienable rights. If you go about your day unarmed and helpless, you are a victim waiting for a crime to happen. YOU are responsible for your protection, the police, even as hard as we try, usually only arrive after the crime.

“Get a gun, take a class and refuse to be a victim.

“Thank you to everyone who helps the police, we are you.”

Amanda- Most of us leave our gun up on the shelf and yet we carry this fantasy that we can use it for defense.

Rob- We pretend we’re armed at home, and that we don’t need a gun when we’re in our car. So you want me to go armed as I drive to the store?

Amanda- Rob, I know you think you’re special, but you’re special just like the rest of us. Yes, carry your gun. Even you, and even when you’re driving in your car. Make your firearms instructor proud of you.

Rob- Defending yourself inside your car is hard. Most of us don’t have training to do it. And it’s very different from what I practice at the shooting range.

Amanda- A gun is a defensive tool that works best at a distance. We want to be far enough away from our attacker that we can stop the attack before the attacker can reach us with his hands. That is why it was a good choice to step out of the car and then draw your gun.

Rob- Our driver didn’t have much time to think.

Amanda- No, he didn’t. Criminals attack us without warning. That is why we talk about these stories now, so that we have a model in place of what we could do in a situation like this. There are over 6 thousand examples of armed self-defense every day, and each one is different. Each of these gun-owners adapted their plan to their situation.

Rob- What else did you see in this story?

(command voice) Stop. Get back. Get on the ground. Stay there.

That tells the criminal what to do. It also attracts witnesses. They might not be eye witnesses, they might be ear-witnesses. They heard you tell the robber to stop the attack. If you have to shoot, then those loud, clear commands have already started your defense.

Rob- So that is why my instructor had me shout “STOP” when he had me practice drawing my gun?

Amanda- Exactly. We want to build that habit as we practice.

Another thing. It is really hard to hold someone at gunpoint and get on the phone at the same time. The local police appreciated that our defender detained the robber. Larger police departments would tell you to let the robber go and get on the phone. You want to do that so you identify yourself as the good guy. I suspect that the witnesses called police in this case.

Rob- Lets go on to our next story.

You hear the yelling and screaming. Your mom’s ex boyfriend threatened to cut your mom’s throat and to kill all of you. Now he’s choking your mom. Your older sister is trying to pull them apart and save your mom. It isn’t working. Your younger brother grabs your mom’s gun and runs toward the fight. Your brother is only 12 years old. You are 15, so you take the gun from your brother and shoot the attacker. Now he lets go of your mom.

Your family runs away and calls police. The police said your mom’s boyfriend was a convicted felon.

Amanda- Childproof your guns, and gun-proof your children.

Amanda- This woman was terrorized by her violent boyfriend. She got a gun for self-defense. She should also have taken out a restraining order, or an order of protection. Even though it is only a piece of paper, it is an important step in your legal defense if you have to use force to defend yourself.

Rob- be hard to convict

Amanda- This is what I have to teach someone who was not a gun person and then they get a gun.

Rob- That is serious.

It is after dark, and you hear someone knock at your door and call your name. It is your neighbors. All of them. The husband, the wife, and their child are asking to come in. You open the door. They said a crazy man broke into their home. They had already called police. You try to make them comfortable when your wife sees someone at your back door.

A stranger breaks through your screen porch and then breaks the glass in your back door. You yell for him to stop. He enters the home and you shoot him.

Now your attacker steps back outside the home. You and your family retreat and call police.

EMTs take the attacker to the hospital.

Amanda- This is the episode where second parties are armed. We had that in our first story too. It sounds like the intruder could have been intoxicated.

Rob- It is hard to reason with a crazy person.

Amanda- Do you have your gun on you right now?

Amanda- Good. You don’t need a carry permit to go armed at home. You need a gun and to know how to use it

..and have a holster. A holster helps a lot.

Rob- Better yet if all four of the adults in this story were armed.

Rob- He did not chase the bad guy and keep shooting.

Amanda- At night? You don’t know how many people are outside your home. The crazy attacker may have had friends.

Our armed defender did the right thing. He moved his family and his neighbors to safety and called police. That identified the homeowner as the good guy, and he got help on the way.

Rob- Goodguys call police. Did the first family do the right thing to leave their home when they were attacked?

Amanda- If they didn’t have a tool to defend themselves, then they did the right thing. They ran to safety and called police. I’m glad their neighbor was able to protect them.

Exit-  Rob- And we’ve run out of time. Amanda, thank you for helping us again. Where can we learn more about you?

Amanda- You can find me at eye on the target radio radio. I have two radio programs and I instruct on the weekends.

Rob- Don’t you have a concealed carry fashion show in the works?

Amanda-?  Yeah I do.  At GRPC – Gun Rights Policy Conference in Chicago put on by the 2nd Amendment Foundation.   It should be the kick off to a good 2A time.

Rob- Some listeners asked us to put out a longer show. Some like it short. Please tell us what you like by leaving a message on the podcast facebook page.

Amanda-   We share this podcast with you for free.  All we ask is that you share it with a friend and give us a rating on I-Tunes and Stitcher.  We’re also available on Google Play Music and Spotify.