Rob- Introduction- I’m glad you found us and welcome to episode 131 of Self-Defense Gun Stories.

This podcast is for people who are curious about a firearm for self-defense, and for those who already own one. I’m your host, Rob Morse. We’re joined this week by self defense instructor Elizabeth Hautman. 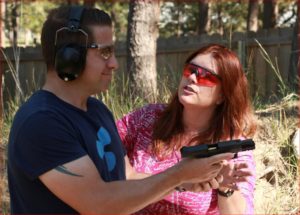 Elizabeth- Hi, Rob.  I’ve been working and shooting and selling gift certificates for the holidays.

Rob- Elizabeth, how do you listen to the show?

Elizabeth– I listen to it on Itunes.

Rob- That is how most people listen. Please put us in your pocket every week, and give us rating on I-Tunes and Stitcher. Please leave a comment to tell us what you liked about the show.

Please introduce our podcast to our new listeners.

Elizabeth- We study several examples where gun owners survived a life threatening situation. Were they lucky, or did they have a plan? What should we do if we were in their place? Our first story took place last week in Thomasville, Georgia.

Rob- First story-  Do you have your firearm on you when you go to your bank?

You’re walking out of the Suntrust bank at 2 in the afternoon. A man walks up besides you. He grabs your arm and he tries to grab your purse. You pull your purse away from him, but he draws his gun and demands you hand over your purse. You draw your gun and the robber runs away. You go back into the bank and call police.

Elizabeth- Good she had an attitude to not be a victim.

Rob- Before you tell us more, is this sort of robbery unusual? Someone walked up to this lady in daylight right outside a bank.

Elizabeth-  Good she had a gun

Rob- What else do you see?

Elizabeth- I wish she’d had more practice because she drew her gun while someone else had their gun pointed at her, and she did not fire her gun. That makes me think she was slow and her attacker might not have had a real gun.

Rob- Does she have the right to defend herself from being robbed?

Rob- What do you want your students to do in this situation?

Elizabeth- Let’s wait and I’ll explain that during our second story?
Rob- What is the minimum training you want someone to have before they are safe to carry a firearm in public?

That is enough for now. Our second story happened last week in Shively, Kentucky.

Rob- Second Story-  Are you armed as you drive your car?

You’re going back to your car after doing your shopping. It is a little after 9 at night. Two men approach you and ask you for a light. You reach into your car for a lighter, and you’re facing a gun to your head when you turn back around. You move and draw your own gun. The attackers shoot at you as they run away. You shoot back. The robbers missed you. Other witnesses say your attackers limped as he got into a getaway car.

Police arrest both robbers at a nearby hospital where they sought treatment. In addition to robbery, one of your attackers had an outstanding warrant for his arrest.

Elizabeth, explain why the victim had a right to use lethal force to defend himself?

Rob- Well that is pretty clear.

Elizabeth- Also, this might have been avoidable. Don’t hang around outside the store in the dark. It is a transition space and people can appear out of the darkness and cause problems for you.

Rob- We have holiday shopping coming up in a few weeks. What else?

Elizabeth- Thank goodness he had a gun and the training to use it.

Rob- What did this victim do that was different from the victim in our first story?

Elizabeth- He had a plan and he practiced.

He moved as he drew his firearm. He quickly presented his firearm and shot his attackers. Our third story happened last week in Spokane, Washington.

Rob- First this message from my good friends at FASTER Colorado.

Rob- Third story- Are you armed while you’re at work in the evenings?

You own a convenience store. Tonight you are behind the checkout counter. The next customer walks up and instead of dropping some chips on the counter or saying he wants to pre-pay for gas, this man is wearing a bandana over his face and has a knife pointed at you. The robber says, “Give me the money.”

You take a step back and draw your gun from under the counter. Before you say anything, the robber is running out the door. You call 911 and then show the police the video from your security cameras.

Elizabeth- Good work, but that isn’t best practice. That isn’t what I want my students to do.

Rob- What should we do if we faced a man with a knife?

Elizabeth- A knife is a lethal threat, so you have the right to use lethal force to stop that threat and save your life. It is your duty, and you have to think about how to perform that duty before you face the threat. There are lots of times during the day when the store owner is away from the cash register and I want him to be able to protect himself all the time.  You don’t have a gun to protect the money, you have a gun to protect your life, so have the tools you need on your body where you need them, not at the cash register.

Elizabeth- I’m glad the store owner had a gun, but I want him to get much more training.

Rob- Why do you think he wasn’t proficient with his firearm?

Elizabeth- It is one motion to clear your garments away from your gun, grab your gun, present it in front of you as you put your hands together, see the gun sights on the target, and press the trigger to fire. If he practiced, then that is one motion and one thought, but our defender didn’t fire. That means our defender was slow and the attacker had time to run away. Good decision for the defender to not shoot once the robber turned and started to run.

Rob- You’re saying that presenting your gun and shooting is a single action, like clapping your hands.

Elizabeth- Yes, it is that fast. Once you decide to shoot you’ve got a shot on the way in a little over a second. That isn’t enough time for your attacker to see your gun, decide what to do, turn and move toward the door.  That is why we know that this defender needs to practice.

Let’s move on. We go to Natchez, Mississippi for our fourth story.

Rob- Fourth story- Are you have a firearm where you can get it as you get out of bed?

Your wife shakes you awake at little after sunrise Saturday morning. She says she heard someone moving around outside and knocking at your front door. You live in a gated community. You have a gate to your property and you are not expecting visitors. You look out your window and notice that the doors are open on your truck sitting in the driveway.

You pull on pants and put on your gun. As you walk out to your truck, you notice that the doors are open on the cars in your garage too. A stranger is sitting in one of your cars. You walk up, point your gun at him, and tell him not to move. Your wife has already called the police. The robber was charged with four counts of burglary and a misdemeanor charge of malicious mischief.

Rob- When to your teach your students about the right and the wrong time to use lethal force?

Elizabeth- What classes come before and after legal use of lethal force?

Exit-  Rob- that wraps up this episode. Elizabeth, thank you for helping us again. Where can we learn more about you?

Elizabeth- I instruct in Colorado Springs.  I teach small classes at my private range in Black Forest.  Students can contact me at Colorado Boots Firearms Instruction.

Rob- Let us know what you think by leaving us a message on the podcast facebook page.

Elizabeth- We share this podcast with you for free.  Please share the podcast with a friend and give us a rating on I-Tunes and Stitcher.  We’re also available on Google Play Music and Spotify.