Rob- Introduction- I’m glad you found us and welcome to episode 159 of Self-Defense Gun Stories. This podcast is for people who are curious about self-defense, and for those who are already trained. I’m your host, Rob Morse. We’re joined this week by self-defense instructor Elizabeth Hautman. 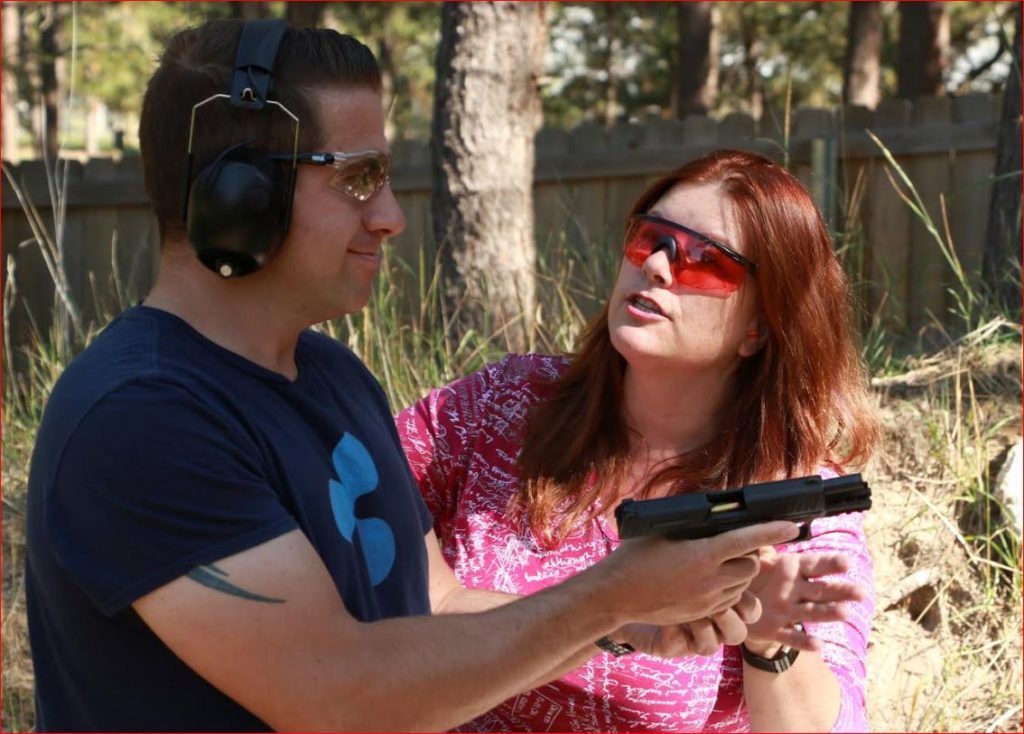 Elizabeth- Hi, Rob.  I’ve been teaching and have a special firearms safety class for children this month.

Rob- I owe our listeners a thank you after they left two more comments (49) and four more ratings (81) on iTunes. Listener Azul said,“Always excited to see this show up in my podcast feed. Almost an instant listen. Please keep it up.” Thanks Azul. Please go to the iTunes store where you subscribe to podcasts and leave your comment and rating. Your support tells new listeners that the show is worth their time.

I’m looking for an audio editor for the spanish version of Self-Defense Gun Stories. If you know someone, then please ask them to contact us.  Until then, Elizabeth, please introduce the podcast to our new listeners.

Elizabeth- We’ll talk about recent examples where gun owners were in a life threatening situation. What should we do if we were in their place? We give you the links back to the original news article in our show notes.  Our first story took place last week in Randolph County, West Virginia.

You hear your friends shout from the front porch. It is Sunday afternoon and your ex-boyfriend is back. You took out a restraining order so he shouldn’t be here. He also brought a gun. You retreat to your bedroom and get your handgun. A second later your ex kicks in your front door. He shoots at you. You shoot back and you keep firing until he leaves. Now he runs away. State police are looking for the wounded man in several counties.

Elizabeth- She was armed and she needed to be.

Rob- Why is that?

Elizabeth- She didn’t have time to go to the back of her house, open the gun safe, get ammunition, load a magazine, put the magazine in the gun, rack a cartridge into the chamber, and then defend herself. That is how we store the guns we don’t need. She needed her handgun right now, and she was prepared.

Rob- What else did our defender do correctly.

Elizabeth- She took out a restraining order. That means she is identifying herself as having an abuser and trying to avoid contact. She also shot until the threat stopped, and no further. She stayed in her home and didn’t chase her attacker as he ran. She called the police and stayed at the scene if it was safe to do so.

Rob- I read about people who don’t get those things right.

Elizabeth- We describe it with a few words, but it is a lot to do in the moment of defense. That is why we want to think about the situation now and have those good habits in place.

Rob- Is there anything else we might do if we were in this situation?

Elizabeth- First, have your gun on your body. I think hers was in the nightstand, and that could have been too far away.

Second, don’t confront your attacker. He shot at her and she could have been killed. Plan to stay out of a gunfight. That means we want to stay out of sight at the back of a hallway. If your attacker comes toward you then shoot from there. The only part of you that should be visible is your gun and a small part of your face so you can get your eye behind your sights. You don’t want your attacker to shoot your knee or your elbow or your shoulder, so we practice that position in our advanced classes. Keep out of sight and don’t be a target.

Rob- I’ve practiced that position in my bathroom. I try to peek around the edge of a mirror and shoot at the ugly guy pointing a gun at me.

Elizabeth- I teach my students as we look at each other around a corner, but we use a finger gun or a plastic replica of a firearm called a “blue gun”.

Rob- Is there more?

Elizabeth- That is enough for now. Our second story happened last week in Des Moines, Iowa.

Your loading up your truck. It is Wednesday morning and the boat is ready to go. Your 10 year old son is in the truck. You hear the doors lock on your vehicle as your son shouts to you. You see a stranger come around the front of the truck and try to get in the driver’s side door. You have your concealed handgun license. You’re armed. You draw your firearm and point it at the stranger. You order him to the ground and call police.

The man who attempted to steal your truck and kidnap your son has prior convictions for burglary and had walked away from a work-release program.

Elizabeth- This dad was in the right place at the right time to protect his family. He stopped the threat. I assume he got his son into the house pretty quickly. I also like that he did not shoot the attacker when the attacker was no longer an immediate and unavoidable threat. This dad had a plan.

Rob- The thief or kidnapper said that he knew the defender, that they were old friends, but they were strangers.

Elizabeth- Criminals lie. In my case, I would have told the man to leave and left it up to the police to find him. Maybe I’d get my son to take a picture of him, but I wouldn’t hold him at gunpoint for the police.

Rob- Was that a mistake?

Rob- Yes, but it has been over a year since I practiced.

Elizabeth- Are you willing to bet your freedom and your families future that you’ll do it correctly?

Elizabeth- Still, I’m glad the bad guy is in jail.

You and your wife are at home on a Sunday afternoon. You hear something outside. You look out your front window and see your neighbor walking toward your house with shiny pipes in his hands. Your front door is locked, but you shout to your wife as you go to the back room and get your handgun. A moment later, the neighbor kicks in your front door. You shoot him and he runs away. The police find two large kitchen knives on the driveway where your neighbor dropped them.

The police take your neighbor to the hospital. He is menally retarded and bi-polar. He says he attacked you because you were controlling the electronic devices in his house. He was arrested when he left the hospital.

Elizabeth- I like that his front door was locked. That is awesome! Also, our defender had a gun. He was in a defensible position inside his home. He did not chase the intruder. He called the police, stayed at the scene, and gave a report.

Elizabeth- Rob, this neighbor had been violent in the past. Our defender got his gun because the neighbor had broken into his home before. The two metal pipes that the defender thought he saw were actually large butcher knives that his attacker brought with him.

Rob- That is hard. What else would you like us to do if we’re in that situation.

Rob- Is there anything else.

Elizabeth- If these were my students, then I’d tell them to get an alarm with motion sensors. Put longer screws into your strike plate on your door. Put a solid core door on your front door..and maybe on your bedroom door. We want to retreat to our bedroom and have the police find our crazy neighbor pounding on the front door. I also want both the husband and wife to be armed.

Rob- Do you talk about that with your students?

Elizabeth- A little of that is in every course, but we focus on it when we talk about self-defense inside the home and outside the home.

Rob- Fourth story- Are you armed at work.

You and your family run a seasonal fireworks stand. You’re behind the cash register at dusk on the third of July. You see a man get out of a car, but the car doesn’t park. The man pulls on a black sweatshirt and pulls the hood over his face. That seems suspicious, so you turn your body and put your hand on your gun. The man doesn’t shop for anything, but comes directly to the checkout line. The stranger draws a gun and points it at you. He demands your money. Then he waves the gun at other employees and at your 13 year old daughter. You draw your gun and shoot your attacker. He runs from the fireworks tent, but can’t get into the getaway car. The female getaway driver leaves him behind on the ground.

You call 911. No one else is hurt, not your family and not your customers. EMTs take your attacker to the hospital where he dies.

Elizabeth- I’m imagining a robber pointing a loaded gun at my daughter. Wow. Our defender saw the attack coming. He had his hand on his gun and that cut his presentation time in half. Dad the defender waited until the robber was distracted. He shot the attacker several times. He stopped shooting when the attacker ran away. All of his shots were on target and none of the bystanders were injured with either the defenders firearm or by the attacker.

The defender called police, stayed at the scene, and gave a statement.

Rob- That is a lot to do correctly in a few seconds.

Elizabeth- The defender was a military veteran. The tent had open walls so he could see his attacker coming, but that is only a benefit if your eyes are open and you are observing your surroundings. Dad was alert.

Rob- Is there anything else you’d tell your students to do in this situation?

Elizabeth- What if another family member was behind the cash register when they were robbed? This is a dangerous business and all the adults need to be trained as defenders. I want them to have medical supplies behind the counter. We want at least a couple of tourniquets, chest seals, and pressure bandages. Most people survive being shot by a handgun, and we want to give our family and customers the best chance.

Rob- Do you talk about situational awareness and preparation with your small business owners?

Exit-  Rob- that wraps up this episode. Elizabeth, thank you for helping us again. Where can we learn more about you?

Elizabeth- I instruct in Colorado Springs.  I teach small classes at my private range in Black Forest. Contact me at Colorado Boots Firearms Instruction.

Rob- After you look at Elizabeth’s classes, then leave us a message on the podcast facebook page.

Elizabeth- We share this podcast with you for free.  Please share the podcast with a friend and give us a rating on I-Tunes and Stitcher. We’re also available on Google Play Music,Tunein, Spotify, and iHeart Radio.

I’m Rob Morse.  We’ll be back in a few weeks with more Self-Defense Gun Stories.