Rob- Introduction- Welcome to episode 229 of Self-Defense Gun Stories. We’re glad you found us if you’re well trained.. and also if you’re new to self defense. I’m Rob Morse and we’re joined this week by firearms instructor Heather Reeves. 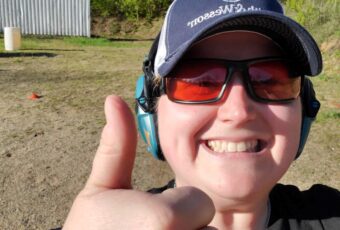 Heather- Hi, Rob.  I’ve been working and teaching new students. Ammunition is so expensive. We’re using a Coolfire simulator and a SIRT pistol with new shooters.

I agree with him about our instructors, and I want to thank all of our listeners for talking to us. Please leave a comment and a rating on iTunes. Was ( 220,128)

Heather- We defend ourselves with a firearm tens of thousands of times each week. Today, we’ll look at a few recent examples. Were these gun owners lucky, or were they prepared? What should we do if we were in their place? We give you the links back to the original news articles on our podcast webpage.

Rob- First story- Do you have a firearm nearby at night?

You are startled awake. Hear heard breaking glass, and now you hear other noises. You try to turn on your lights but the lights don’t work. You grab your gun and move down the hall. You see strangers coming into your house through your garage door. They shout for you to put your hands up. You step back into the hallway and then shoot the armed robber in front. Now, they run away. You call the police. It is three in the morning.

Police arrest your attackers nearby. There were six of them, including the driver. They turned off the power to your house. The robber you shot dropped an airsoft pistol in your garage as he ran. Your attackers wanted to rob you and your wife so they would have money to bail one of their friends out of jail. EMS takes your wounded attacker to the hospital where he is expected to fully recover. One of your attackers was your granddaughter.

Heather- This man and his wife avoided being attacked because of the things they did before that night. They locked their windows and doors. They heard the noise of the robbers breaking a window next to the garage door. They owned a gun. They had a plan. The homeowner defended himself and his family when what looked like an armed robber gave him orders to put his hands up. Our good guy stopped shooting when the robbers ran. He did not chase the bad guys. He stayed inside and called 911. He spoke to the police when they arrived.

Rob- Heather, how do you get that much right at 3 in the morning?

Rob- Please drop your homework assignments in the box as you leave the podcast.

Heather- Put your hand down, Rob. I’ll get to your questions later.

Joking aside, there are classes where we do exactly that. You talk to your spouse, your children and your roommates every day. Make a plan with them. If we hear or see this, then this is what we’re going to do. Now, let’s walk though it and see what works and what we need to change.

Rob- I like that. What else do you see?

Heather- This is what I tell my students. Have a flashlight. This homeowner had to shoot in the dim because the robbers turned off the lights. Cutting the power might have also turned off an alarm system unless it had a battery backup. In this case with only a husband and wife, I want them to stay in their bedroom and lock the door. That way you’ve got another door between you and the bad guys. With six of them, you don’t want to get into a situation where they can surround you. Also, I want the wife to get her gun and her flashlight, and then be on the phone with 911.

Heather-
Rob- Anything else?

Heather- That is enough for now. Our second story happened in Chesterfield County, South Carolina.

Rob- Second Story- Are you armed in public?

Four men stop father and son on their way to work.

You and your dad are leaving for work. Two men walk up and say they are lost. Then, they draw guns and order you back into your home. They tell you to open the gun safe. They shoot your dad in the leg. You grab a shotgun you keep near the gun safe. You shoot both attackers. One drops his gun and falls to the ground, the second attacker runs away. You and your dad see a car drive away. You call 911 and treat your dad’s leg until EMS arrives.

One attacker is declared dead at the scene. Police find the getaway car and arrest your robbers. The three surviving robbers are charged with attemted murder and aggrivated robbery. One of the robbers who stayed in the getaway car had tried to rob your house before and was out on bond awaiting trial.

Heather- Wow. Our defender recognized an opportunity and took it. He knew where they had a loaded shotgun. He shot his attackers.

Rob- That is a great recovery from a very bad situation. What do you tell your students to do?

Heather- I want you and your dad to own a firearm you can carry on your body. I want you to have your carry permits. Get training and be armed as you walk out your door in the morning. If the two of you practice together even a little bit, then you can make your attackers look like idiots.

Rob- What do you mean?

Heather- It is very hard to attack two people who know how to defend themselves. There are things you can do outside, as you come into your house, and as you go down the hallway. For example, what if the first one of you through the door ran right through the house and out the back door. Now you call 911 and are waiting for the bad guys to come outside. Be careful because there were two more attackers waiting in the car.

Rob- Is there a class where you focus on defending yourself in public?

Rob- First this message from Jews for the Preservation of Firearms Ownership.

Rob- Third story- Are you armed when you’re driving?

It is after midnight when you and your friend stop the car. You’re about to get out when you hear footsteps. You look outside and see two people with a gun pointed at you. They order you out of the car.

You own a gun. You’re armed and carrying concealed. You and your friend start to get out of the car. You present your firearm and shoot your two attackers. They run back to their car and drive away. You call 911.

Police find your attackers nearby. They also find a car with one dead robber in it. The body of the second robber was dumped on the road a hundred yards away. The two surviving robbers are charged with attempted armed robbery and aggravated assault with the intent to rob.

Heather- Our defender was armed. He shot from his car at multiple attackers at night. He stopped shooting when his attackers ran away. He stayed at the scene. He called 911 and spoke to the police.

Rob- I bet you want both of the people in the car to be armed.

Better yet, get out of your car and go inside. Parking lots are transition spaces.

Rob- When do you make your students familiar with dangerous spaces?

Heather- Our forth story took place in Phoenix, Arizona.

Rob- Fourth story- Are you armed at work?

You work at a gas station/convenience store. It is 11 at night when several customers rush inside. They say a man attacked them as they entered your store. You go outside to see if it is safe for them to leave. There, a man tells you to go away. The stranger rushes at you with a stick in his hand. You own a gun. You’re armed. You shoot your attacker before he hits you. Your attacker drops his baton and turns away. You stop shooting and retreat to your store.

You call 911. Police arrest your attacker. EMS takes him to the local hospital where he later died.

Heather- I looked at the videos, and it was confusing if the attack took place right at the door, or farther into the parking lot. Maybe the customers were attacked in the parking lot and the clerk was attacked as he came out of the door.

Rob- That is consistent with what I saw and read.

Heather- Constitutional carry state. The clerk didn’t need his permit to walk armed outside his store. He recognized that a club is a lethal threat. He stopped the threat. He retreated and called 911.

Rob- I was surprised that we didn’t see any security video.

Rob- Why is that?

Heather- That permit in your pocket shows the police that you have a clean criminal record. It introduces you as one of the good guys.

Rob- Do business owners come to you for training? Is there anything particular you want to teach them?

Heather- Give your location. Say you need medical assistance. Say someone has been shot, but the scene is secure. Say that a number of people were attacked, but it looks like their injuries are not life threatening. One person is injured in the parking lot. He had a club.

Rob- So defending my customers will earn me a legal bill?

Heather- That is what self-defense insurance is for.

Exit-  Rob- that wraps up this episode. Heather, thank you for helping us again. Where can we learn more about you?

Heather- Look for me at http://tacticaladvantageguns.net/about/,

Classes, A girl and a gun shooting league. https://www.agirlandagun.org/cat/mi-portage/

Rob- After you look at Heather articles, then leave us a message on the podcast facebook page.

Heather- We share this podcast with you for free.
Please share the podcast with a friend and give us a rating on I-Tunes and Stitcher.
We’re also available on
Google Podcasts, Tunein, Spotify, Podbean and iHeart Radio.

Rob- This show is part of the Self-defense radio network. Find more pro-freedom podcasts at sdrn.us

I’m Rob Morse.  We’ll be back next week with more Self-Defense Gun Stories
~_~_