Introduction- Rob- We’re back with episode 25 of Self-Defense Gun Stories.  I’m Rob Morse and I’m joined this week by self-defense instructor Bob Mayne.  Bob is a special guest, so this is a treat for me to have him with us. 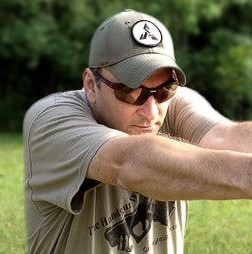 Bob- Hi, Rob.  Hi to our new listeners, and welcome back to our regular listeners. Together, we report and analyze examples of armed civilian defense.  We inform you about recent self-defense events, and I hope we inspire you to defend the people you love.  Our first story took place last week in Michigan.

First story- A man broke into a home it Lincoln, Michigan just after noon.  One resident told him to leave, but the intruder refused saying he had just killed a policeman down the road.  The resident called police.  The intruder entered room after room, until he forced his way into a bedroom, where the occupant shot the intruder.  Police arrived and took the intruder into custody.  He was wanted for violating his parole.  Police took the intruder to a hospital where he was treated for a non-life-threatening gunshot wound.  He is now in jail awaiting a hearing.

What do you see here, Bob.

Bob- Note that this took place in a home at noon.  That means it could take place anytime and anywhere.

The person with a gun stopped the threat.  The other person had to flee.

It would be great to have bare hand combat skills.

Our next story takes place just after midnight in Arizona.

Rob- Second Story- A small 23 year old woman was walking past a Glendale convenience store.  A man asked her for a cigarette.  The man then grabbed her and put a gun to her neck.  The robber said  ‘It’s loaded, don’t move.”  The young woman dropped her soda, drew her gun and shot her attacker.  She ran.  She then called the police from her home nearby.  Her attacker died at the scene.

Witnesses and the store surveillance cameras confirmed the woman’s account of the story.  The young woman said, I had to save my life, but I’m sorry the man died.

Bob, how did this woman survive?  She shot a man who already had a gun to her neck.

Rob- what else do you see in this story.

Bob- Robbers use a question to get close to us.

Disparity of force, since the woman weighed 85 pounds and was only 4 foot 11 tall.

We don’t know how close she lived to the convenience store, but we usually say don’t leave the scene and call police immediately.

Rob- Third story-  Criminals have to choose their victims wisely.  Some criminals fail this important career limiting capability.  A customer and a gun shop employee both noticed two strangers lurking outside Jim’s Gun Shop.  The shop is next to the owner’s home, and neither the owner nor the clerk were expecting two men wearing white masks at 4 in the afternoon.  The store clerk closed the front door, but couldn’t lock it before the two robbers pushed their way inside.  The clerk drew his gun and fired.  The two thieves ran.  It appears the clerk missed, since police neither found evidence of the bullet’s impact, nor did a criminal go to the hospital looking for treatment.

Bob- The criminal in our second story expected the small woman to be an easy victim.  The owner and employees are armed in of every gun shop I’ve visited.  I suspect these two criminals don’t buy their guns legally so they don’t visit guns shops very often.

Just because you carry a gun, or sell guns for that matter, doesn’t mean you know how to use them in self-defense.  I suppose you could learn to use a gun by being in lots of gunfights, but that is really dangerous and time consuming.  A better way to learn is to find an instructor who has studied what works and who also knows how to teach those techniques.  The clerk needs training and practice.  And gun shops should let you go armed inside.

Rob- Bob, what is the difference between instruction, training, and practice?

Bob- A teacher instructs you on the proper thing to do.

He trains you how to do it by asking you to demonstrate, and then correcting your mistakes.

You practice what you’ve learned so it is available automatically when you need to defend yourself.

Rob- So you can’t train yourself by watching YouTube videos?

Bob- No, but that can be good instruction.  I have several youtube videos up on my members page.  I’m really glad that so many new people are buying guns, and getting their carry permits.  I’m really glad they are getting training and then practicing what they’ve learned.

Exit-  Rob- That wraps up this episode. Bob Mayne, thank you for helping me today.  Where can our listeners learn more about you?

Amber- I instruct in the San Antonio area.  Your listeners can contact me at my website Handgun World.  They can also find my podcast there, and join the Shooter’s Club to see our videos.

Rob- Our listeners can share their thoughts with us by leaving a message on the podcast facebook page.  If these examples inspired you, then please share them with a friend and give us a rating on I-Tunes.