Introduction- Rob- Welcome to episode 48 of Self-Defense Gun Stories.  This show is for the many people who think they might want a firearm for self-defense, and those who already have one.  I’m Rob Morse and we’re joined this week by self-defense instructor Jenna Meek. 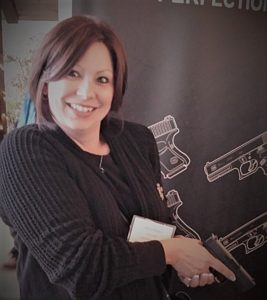 Hi to our new listeners, and welcome back to our regular listeners. We’ll report and analyze three examples of armed civilian defense.  I hope we inspire you to defend the people you care about.  If you have questions or want to hear more, then please leave us a message on our facebook page.

Our first story took place this month in Oklahoma.

First story-  Are you armed at home early in the morning?  Two homeowners were surprised at 6:30 in the morning on New Year’s eve.  They opened their door to find an armed stranger standing in their hallway.  We don’t know if the homeowners in Norman Oklahoma had ever seen the intruder before, but they sure didn’t expect to see him in their home at that hour.  One of the occupants confronted the strange intruder.  The intruder had studied martial arts, and the two men fought.  The second homeowner grabbed a gun and shot the intruder one time.  The intruder broke away from the homeowner and collapsed.

The homeowners called police.  Police said the intruder had a record of criminal convictions including burglary, robbery and domestic abuse-assault and battery.

Jenna- Luckily for the homeowners they outnumbered the bad guy.  It also seems like the physical altercation gave the 2nd homeowner time enough to get a gun into the fight, if they were not already armed.  I think that was a good call since things had gotten physical and the intruder had some martial arts training under his belt.

Rob- It doesn’t say if this was a break in.  Was the door locked?

Jenna- Not sure that the door being locked or not makes a difference.  “Castle Doctrine” laws differ from place to place.  My best advice is know what you are legally allowed to do and act within those boundaries a manner that you can morally live with.  The big point is that you need to be able to explain why you did what you did.  No matter if the door is locked or not. This is just one of the reasons that training on the law is so important!

Rob- I figured a broken door is a poor man’s intruder alarm.

Second Story-  Do you have a gun nearby at night?  A homeowner in Tanglewood, Texas woke to the sound of breaking glass.  At 4:30 in the morning he didn’t expect that sound.  He got out of bed and grabbed his gun.  Then the armed homeowner opened his bedroom door.  He saw a man climbing in his livingroom window.  The homeowner fired once and the burglar ran.

Police arrested the intruder a few houses away.

Jenna- Having a gun nearby seems to be key in this scenario.  Sounds like the homeowner was able to diffuse the situation before it was able to get worse.  Do we know if he was struck by the shot that the homeowner fired?

Jenna- The only other way this may have been better is for the homeowner to barricade where he was with his gun and call 911.  However, we don’t know if there were family members in the house (kids) to worry about and it seems like keeping the intruder from getting inside might have been a better option.  Either way, it does not sound as if anyone was hurt in this scenario.

Third story- Are you armed at home in the evening.  A 74 year old grandmother was watching the evening news.  She stood up from her chair and a robber surprised her and put a gun in her face.  Grandma reached for a gun she keeps next to her chair.  She pointed the gun at the robber and the robber ran.

Jenna-  I love hearing stories about Grandmas defending themselves!  So glad she had quick access to that firearm.  I do wonder if she had such quick access and the intruder was already in the house how she managed to keep the gun away from him though.  Do we know how the gun was kept?  Holster etc…

Rob- It was sitting on a table, so the intruder could have grabbed it as easily as grandma.

Rob- Who explains how to carry a gun for defense.

Jenna- I lead that discussion.  The new students don’t know what they don’t know.

Exit-  Rob- That wraps up this episode. Jenna, thank you for helping me today.  Where can our listeners learn more about you?

Rob- That is between Denver and Colorado Springs?

Jenna – If these examples inspired you, then please share them with a friend, and give us a rating on I-Tunes.
I’m Rob Morse.  Please join us next week for more Self-Defense Gun Stories.

One Reply to “Episode 48 with Jenna Meek”