Rob- Introduction- Welcome to episode 99 of Self-Defense Gun Stories.  This podcast is for people who might want a firearm, and for those who have one and want to learn more.  I’m your host, Rob Morse.  We have firearms instructor David Cole as co-host this week.

Hi, David.  How have you been? 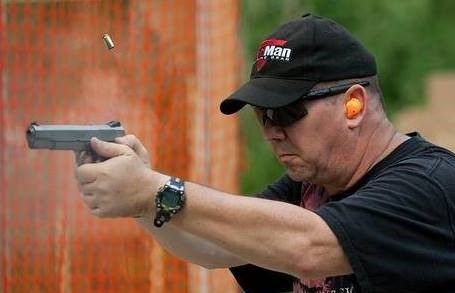 David- Each week we study three recent examples of armed defense to see what we can learn. Our first story took place last week in Miami, Florida.

Rob- First story-   Do you have a gun nearby at night?

You’re a 55 year old woman. You wake up at 1:30 in the morning to the sound of glass breaking. There are other people living in your home with you. You grab your gun and move toward the sound.

You see an intruder in your home and he moves toward you. You shoot him and call the police.

You’re a 25 year old veteran of customs and border patrol. Your intruder is a repeat criminal who is out on parole.

David- Usually barricading in your room is best, but what if there are other in the house who need defending? Kids? A room mate? Learning to move through a structure with a gun is a skill, and doing it properly requires training.

Also, the conventional wisdom is to barricade, but I’m not sure that it always reflects reality. Are we really going to barricade and call the police for every unidentified bump in the night? I don’t think so. I’m not talking about when you know that there is clearly wrong…repeated banging, crashing, footsteps. We hear things like that, we know something is wrong.

But who hasn’t heard a noise and you weren’t sure what it was? Is someone in the house, or was it the bag of trash you set by the door, to take out in the morning, falling over. You’re going to go have a look. You need to learn how to do that correctly and safely.

Rob- You don’t want to shoot your roommate.

David- Barricaded or not, you MUST have a flashlight. The primary reason is target identification…failure to properly identify a threat can land you in prison. There is a lot of misconception around castle doctrine, and a lot of people believe that it means you can legally shoot any trespasser inside your home. Different states may vary a bit, but usually all castle doctrine does is remove the duty to retreat inside your home; some allow for the assumption of intent to harm.

And besides the legal issue, there’s moral issue: Do you REALLY want to shoot someone if you don’t have to…even if legally justified? I don’t. One hypothetical I use to drive this home with folks who don’t get it is this: You hear a noise in the night. You go to check, find your front door splintered, and an obviously drunk man passed out on your couch. It is legal in your state to shoot him. Do you do it? It’s perfectly legal; you will not be arrested or charged. Do you shoot him? Everyone always answers no. I ask why not, and they answer that he is not a threat. Bingo.

David- Low light. You won’t have a clear picture of your sights. Lasers can help, but are no substitute for light. Of course, most of our homes have lights in them, which can be turned on by a switch on the wall…you can use those, too. It was Always funny to watch a new police officer try to clear a building in the dark, rather than just turning the lights on.

Rob – What about giving away your position?

David- We hear this all the time, and I don’t believe it is a concern in most civilian situations. If there is no one there, no harm done. If they are a typical burglar, they are not going to hang around for a gunfight. Not only am I going to turn the lights on, I’m going to shout to them that I am armed. And remember, I’m only going out there if I need to secure another person, or if I am unsure that there is a threat. If those conditions aren’t met, I don’t need to leave my room. I’m going to barricade, call the police, and let the bad guys come to me.

use of cover or concealment. We see motion at night and in our peripheral vision. Use your corners to your advantage. Take a finger-gun and go look at yourself in the mirror. See how little of yourself you need to expose in order to see the target and have a sight picture.

Rob- When do you talk about this with your students?

David- It typically comes up when we talk about legal use of deadly force, and much of the time, they’ll ask about the law concerning home defense before it even comes up in the lesson.

Rob- Second Story-  Are you armed at home after dark?

You’re an 83 year old retired school teacher. You live alone. You get up around midnight to take your medication and then you go back to bed. A few minutes later you hear a crashing sound from your basement. You grab your gun from under your pillow. The basement door is locked, but you can see the door from your room. The intruder kicks in your basement door and enters the house. You shoot him twice.

The intruder runs away and you call police. Police take your intruder to the hospital.

David- This is different than our first story because this homeowner doesn’t have anyone living with him. He can wait and make the robber come to him. That is good combat tactics and good legal tactics.

Rob- explain that a little more.

David- Just as we discussed earlier, just because it’s legal to shoot doesn’t mean you should. Personally, morally I don’t want to shoot anyone I don’t have to. But from a legal perspective, even if the letter of the law supports you, you don’t want an overzealous prosecutor portraying you as “hunting down” your “victim.” It happens. If shooting is necessary, then do what must be done.

If I was in a situation like this, where I know I hear someone in the house, coming up the stairs, I’m going straight to our barricade/call PD strategy. I am also going to announce that I am armed and that the police have been called, loudly. This may or may not deter the burglar, but I am going to let him know clearly “I know you are there. I am armed.” I am going to do my best to convince him that he is better off going somewhere else.

Rob- There are a bunch of things I want to do, and I want them all at once. What do we do first.

David- Defensive tool first. Lock your door. Call the police. Win the race to the phone.

Rob- When do your students practice using a flashlight and hiding behind a corner?

I mostly teach only basic concealed carry, and those classes don’t really allow sufficient time to practice those skills, but we do discuss them. I do offer customizable “coaching packages” which can include those skills if a student chooses to take some continuing training.

For our listeners, I would add that there is very little in the typical home which could be considered cover…which stops a bullet. Drywall does a very poor job of stopping bullets, and something more substantial is necessary for that sort of protection. Think about what you might use to fortify your barricade location a little better…heavy wood furniture, etc.

Rob- Third story- Are you armed at work late at night?

You work in a convenience store. It is 2AM when a customer walks in..only this customer has a gun in his hands. The robber demands the money and waves his gun at you. You open the cash register. You also grab the gun that sits underneath it. You shoot your attacker. The attacker runs.

The Tampa police released this statement. “This is sort of typical self-defense stuff,” said Lt. Urbinas. “If somebody’s threatening you with a firearm, anybody — a clerk, the general public — you have a right to defend yourself. And you can use deadly force if you’re faced with deadly force.”

David- Good that he had a gun.

The victim had the will to win. I don’t know what he said to the robber, but we know what he did. He put his self-defense plan in place. He grabbed his gun and shot his attacker.

From the news story, it sounds like this might have been a close quarters struggle, which can really complicate things. It is difficult enough to shoot accurately under stress, even more so when you are physically entangled with the attacker, at extreme close quarters.

Fortunately, the leg hit that our good guy made on his attacker was enough…this time. But if his attacker had been more committed to the fight, it might have ended differently. The fact that the robber was able to run away tells us that he could have continued the fight if he wanted to. We can’t depend on our attacker giving up just because we got a hit on an extremity.

Rob- what else do you see.

I tell my students not to follow their attacker. Let them go once they run away.

Rob- How can I do the right thing under that much stress.

Win the call to the police. Win the legal battle. If your business is at risk of robbery, then you should have video cameras. Video cameras can help you win the second fight, the legal fight. But you have to win the first fight…well, first. Defend your life first, but prepare to win the court battle as well.

Exit-  Rob- That wraps up this episode. David, thank you for helping us today.  Where can we learn more about you?

David- Our listeners can find me at Black Man With A Gun and on my Aegis Solutions Facebook page.

David-  We share this podcast with you for free.  Please share it with a friend and give us a rating on I-Tunes and Stitcher.  We’re also available on Google Play Music.